Some of you may have landed on my blog looking for my Han Solo Cross Stitch pattern. I'm sorry to say that as of today, I am no longer offering it for free on the internet.

This honestly makes me quite sad. However, I discovered yesterday that there are people who have been stitching up this pattern and selling the finished design online.

When I put up the pattern four years ago, I did it in the spirit of crafty sharing. My husband and I had a great time designing and laying out the pattern, and I had fun stitching it up. I wanted to share that fun with other crafty Star Wars fans. It was meant to be a free thing--I even put a polite disclaimer right on the pattern asking folks to please not sell the pattern or the finished product.


Perhaps this is a case of "if you don't want your work stolen, then don't put it on the internet" (which I hate the sentiment behind), or perhaps these stitchers simply didn't understand that "free to use" doesn't mean "free to sell." But, I'll never forget that sick, heartbroken feeling I got seeing my work for sale under someone else's name. Perhaps this is a sign that it's time to take my crafting in a more serious direction, or simply a lesson about sharing online. I have a lot of thinking to do about how I want to proceed, but the clear course of action for now is to simply remove the pattern.

I'm sorry to anyone who came here hoping to stitch one for yourself. Perhaps there'll be a time the pattern is available again, but for now, I feel the need to protect my design and myself from further infringement. I hope you understand.
Posted by Sherezada at 10:18 AM No comments: 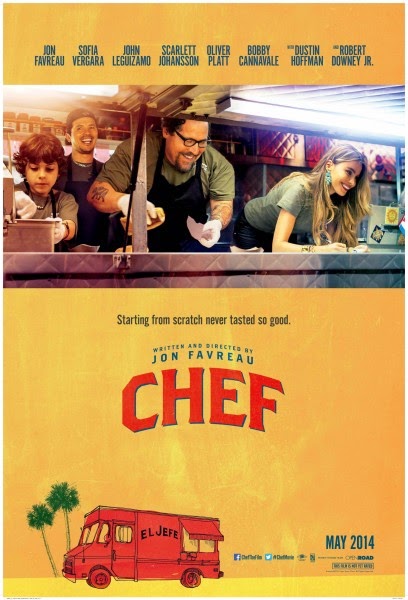 In an alternate universe, there’s a version of me scurrying around a film set, directing actors, looking over script sheets, and conferring with cinematographers and producers. In yet another, I’m whirling around a busy restaurant kitchen, chiming “oui, chef!” while methodically chopping, stirring, braising, and plating. Thus--since I am in neither universe--I hold a special spot in my heart for films about food, because they combine two things I truly love.

Chef, Jon Favreau’s newest feature, is my latest obsession. It’s an upbeat story about a frustrated chef who finds a new passion for his cuisine—and his family life—when he buys a food truck. 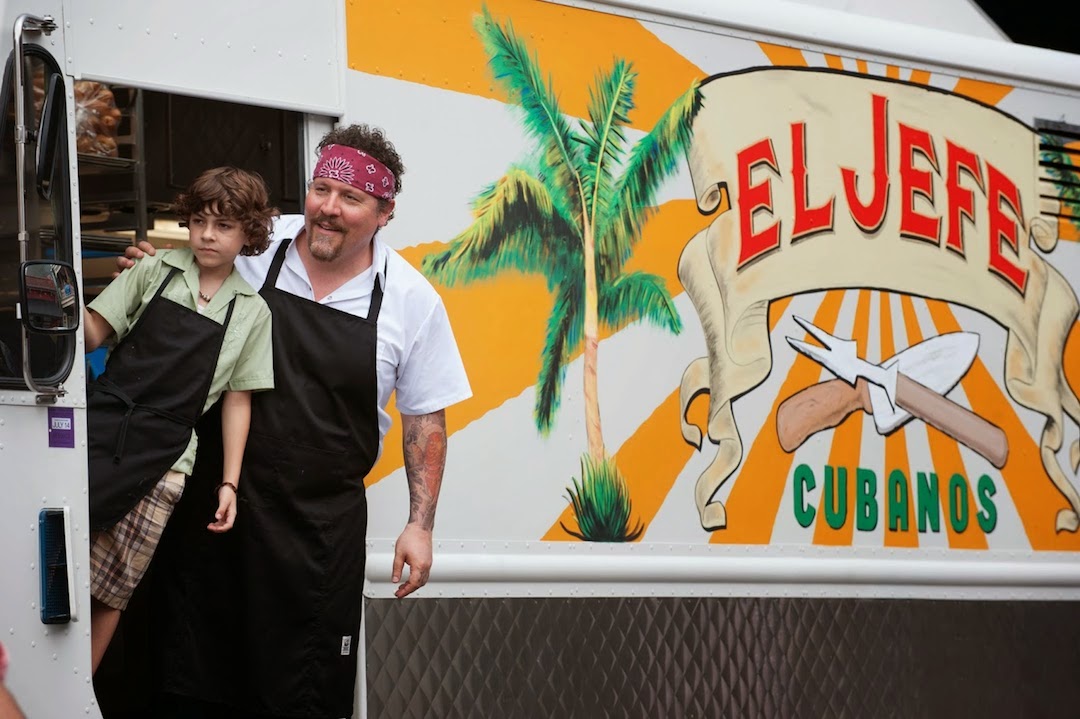 Plot: Chef Carl Casper (Jon Favreau) was once the toast of the culinary world, but is now trapped in a creative rut. He’s just as stuck in his personal life, recently divorced and struggling to connect with his 10-year-old son, Percy (Emjay Anthony). Carl’s frustrations reach a boiling point when he’s panned by renowned food critic Ramsey Michael (Oliver Platt), and Carl’s public outburst goes viral on the internet.

With his career in shambles, Carl reluctantly joins his ex-wife Inez (Sofia Vergara) and son on a trip to Miami, his old stomping grounds. Inspired by the city’s colorful Cuban cuisine, he buys a fixer-upper food truck. When his right-hand-man, Tony (John Leguizamo) flies out to help with Carl’s new endeavor, Carl, Tony, and Percy embark on a road trip across the US to get the truck back to LA. 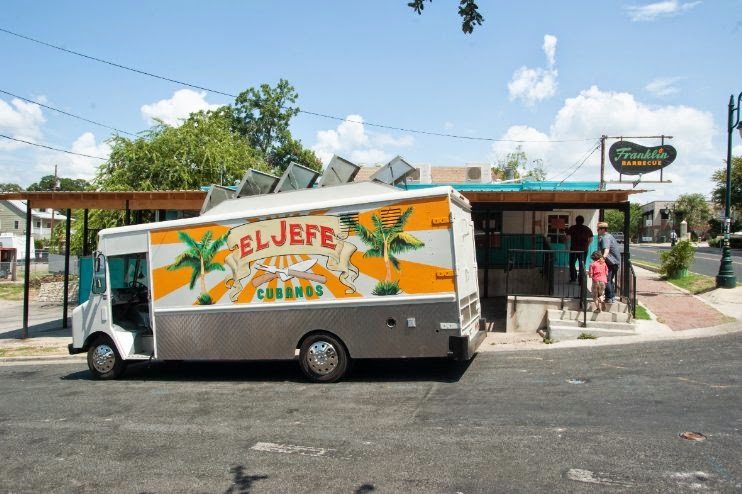 Review: This is the perfect recipe for a feel-good movie: flawed-yet-lovable characters, a lively soundtrack, and gorgeous, lingering shots of lovingly prepared food. It’s obvious that Favreau (who also produced, directed, and wrote the film) did his homework to become Chef Casper, and he moves in the kitchen as organically as a dancer does on a stage.

Aside from the all the delicious food, what struck me the most about this film was the father-son dynamic at the heart of the story. Percy aches to be part of his dad’s life, but Carl is too wrapped up in his career (and misery) to see the clever young man Percy is becoming. When Carl agrees to let Percy come with him on the road-trip, not only do the two bond, but Percy proves himself as a valuable member of the team with his social media savvy. 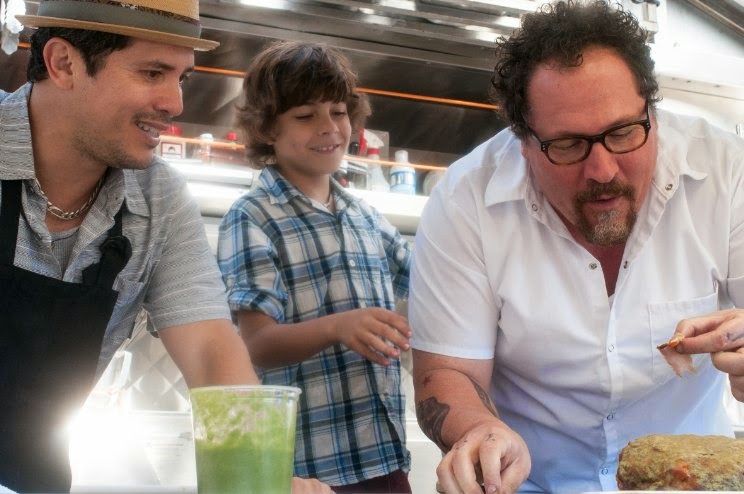 And--odd as this sounds--it was nice to see a movie that was so intrinsically about men and male camaraderie that had nothing to do with violence or macho posturing. Carl and Tony work easily as a team in the food truck, and Percy’s initiation into their world--and into manhood--is filled with heart as well as humor and hard work. 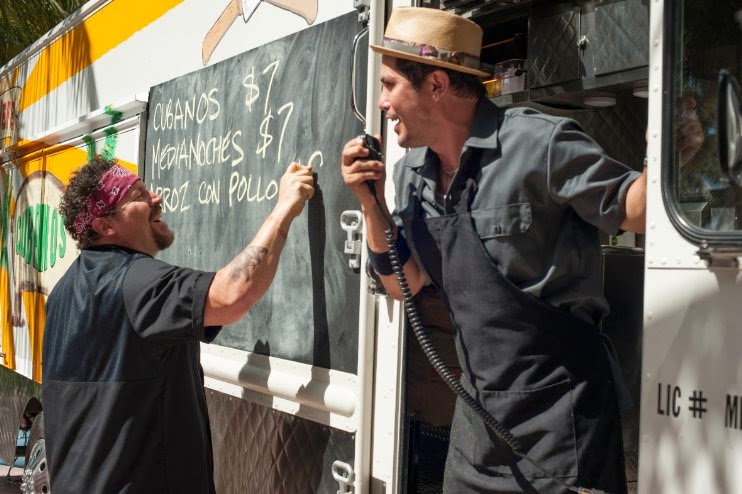 The only complaint I had was the neat way everything came together in the end. Perhaps Favreau saw Carl’s journey as a father as the major arc of the film, but I wanted to see a little more conflict with the food truck and his career trajectory. The ending was just a bit too--dare I say it--Dinsey-eque, but maybe I'm just a little too jaded.

Overall, Chef is not a complex film, but it is a delicious one. In a summer filled with vacant popcorn flicks, Chef is like a hearty grilled sandwich: tasty, filling, and simple. Worth a watch, but make sure you’re not hungry going into the theater!

Posted by Sherezada at 8:00 AM No comments:

Turning the Lights Back On 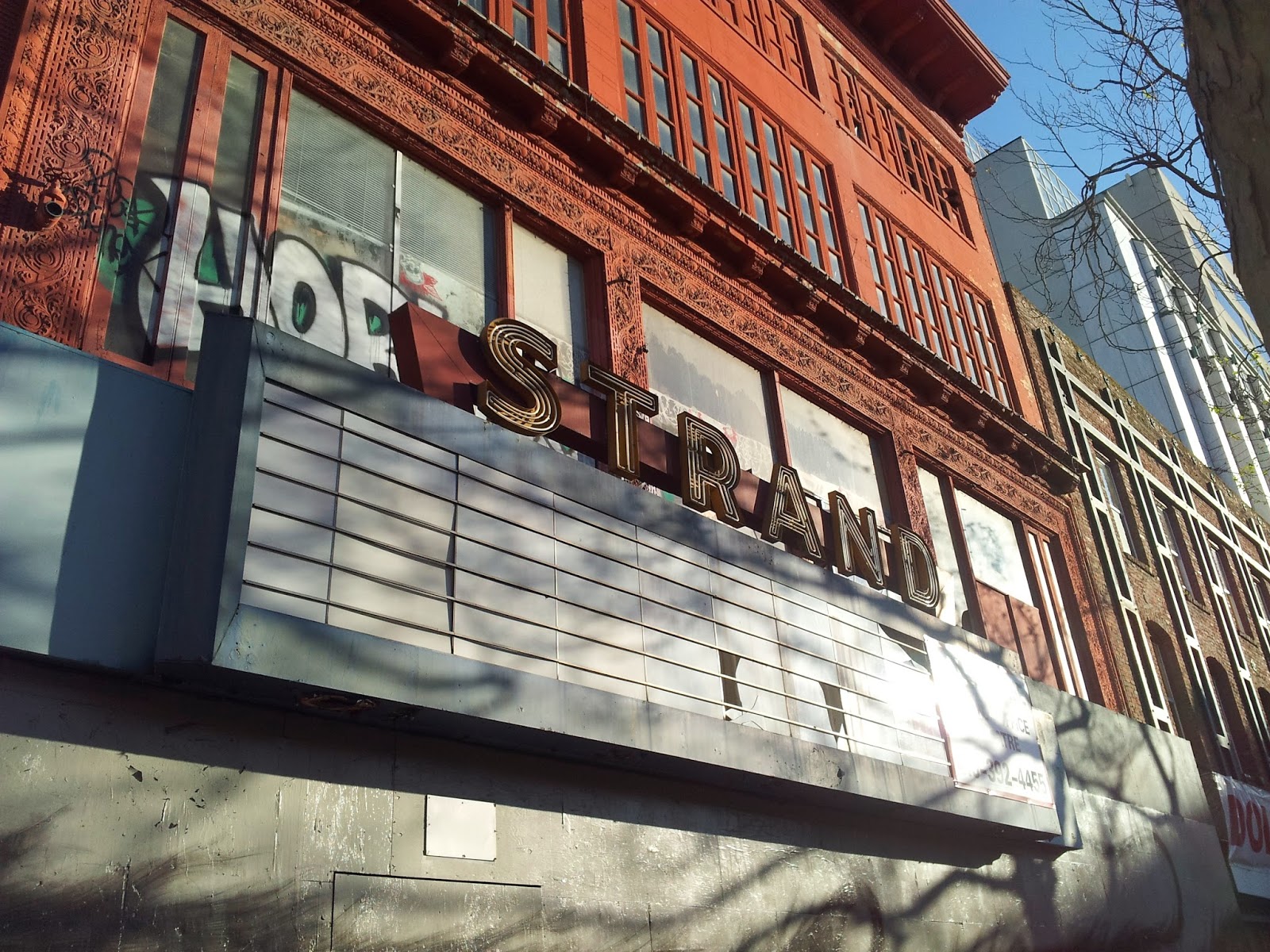 I love films. There's a challenge in trying to tell a good story in 90 to 120 minutes, rather than stretching it out across dozens of hours of television or hundreds of printed pages. There’s an art and a craft to it, and not everyone can pull it off.

I've seen thousands of films at this point in my life, and I spent four years at U.C. Berkeley's Film Studies program. My plan was that I would make a living writing about movies, however, by the time I got out of college in the early 2000s, the internet had made anyone with a computer and an opinion a film critic. I tried to add my own voice in the old-fashioned way, but after four years working a dead-end job at a film magazine, I did the worst thing anyone can do. I gave up.

I’ve realized lately, though, how much I’ve missed writing about movies, sharing my passion and knowledge, and I've decided to start up again.

Perhaps being a new parent has encouraged me. It’s definitely changed my perspective on life, yes, but it’s also taught me something very important—I don’t have time for bad movies anymore. I maybe get to see one feature film a week at home, and perhaps one in the theater every season. So, I have to pick my battles wisely.

Writing film reviews is a way to shake the cobwebs off an old skill set, and help that poor, neglected left brain of mine (there are only so many times it can read the The Very Hungry Caterpillar before giving up hope of stimulation). By sharing my reviews, I can help other moviegoers, because nothing sucks more than wasting your night on a crappy movie.

In all honesty, these reviews will be like my own movie watching: sporadic, not very timely, but hopefully enjoyable. I can’t promise a regular schedule until my son can promise me the same. He's 19 months old now. It’s gonna be a long wait.

My first review will be coming Thursday, where I review the indie foodie flick Chef. I hope you'll join me for it.
Posted by Sherezada at 8:00 AM 2 comments: 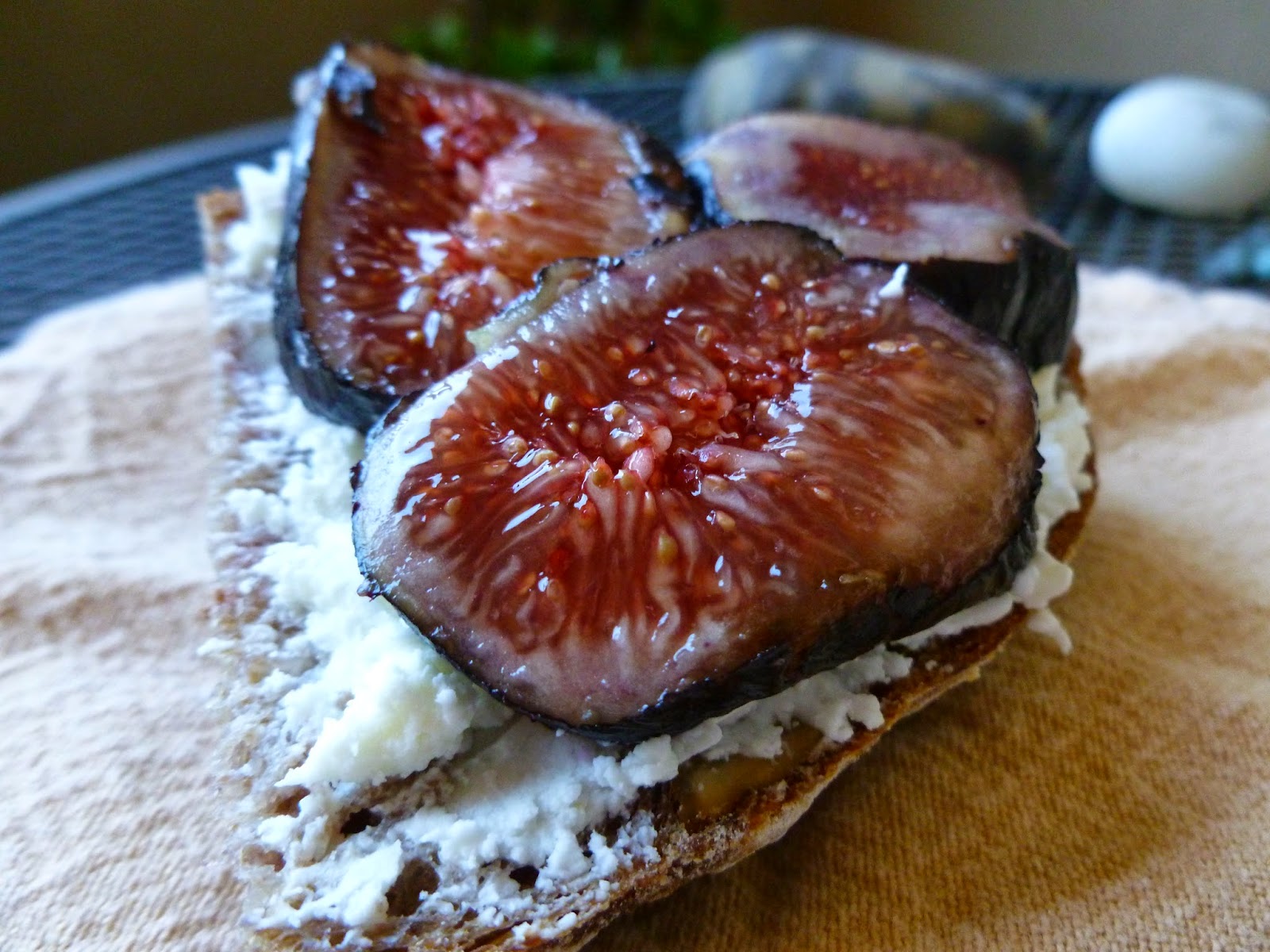 I love you, summer.

I honestly don't know when my obsession with figs began. As a kid, I definitely enjoyed Fig Newtons--with their cakey outsides and thick, chewy centers--but I never really had the chance to try the real deal until I was much older. Really, I'm trying, but I can't pinpoint the moment where I went, "holy bejebus, I need me more of those figs!" Like I did a few weeks ago.

It all began when co-worker/friend of the Professor's was throwing a little birthday bash. For the first time ever, we were "those people" with the toddler at the grown-up party.

I spent a good portion of the festivities alone on the back patio in an attempt to keep Bubby away from the lovely snacks carefully arranged right at his eye level. While dashing about after a whiffle ball, I surreptitiously watched the other adults relaxing inside, sipping their microbrews and chatting about science, politics, and travel. My stimulating conversation? "Look, Bubby! Catch the ball! Catch the ball! No! Don't throw it over the fence!"

I was about to throw in the towel when another of my husband's colleagues arrived with his wife, bearing a colander full of beautiful, ripe figs. Apparently, they had a tree just bursting with the little beauties, and they sliced up a dozen figs to share with the party.

One bite of the glistening fruit--served atop a cloud of blueberry-kissed goat cheese on a slice of soft, sweet French bread--and my afternoon was saved. It got even better when I was encouraged to take home a party cup full of figs. They were gone by the next morning.

Those figs haunted me for weeks. It wasn't a constant obsession, but more of a niggling craving in the back of my head. "You know what sounds good right now? Figs and goat cheese." I'm a realist, though, and I knew that a $6.99 basket of figs at the local produce market wouldn't be nearly as good as the tree-ripened fruit that had seduced me so. Or as cheap.

Then, yesterday, my patience was rewarded. The Professor came home from work with a little green basket of figs in hand, compliments of his colleague and his wife. Craving became full-on obsession: "Damn it! Now I need goat cheese!" 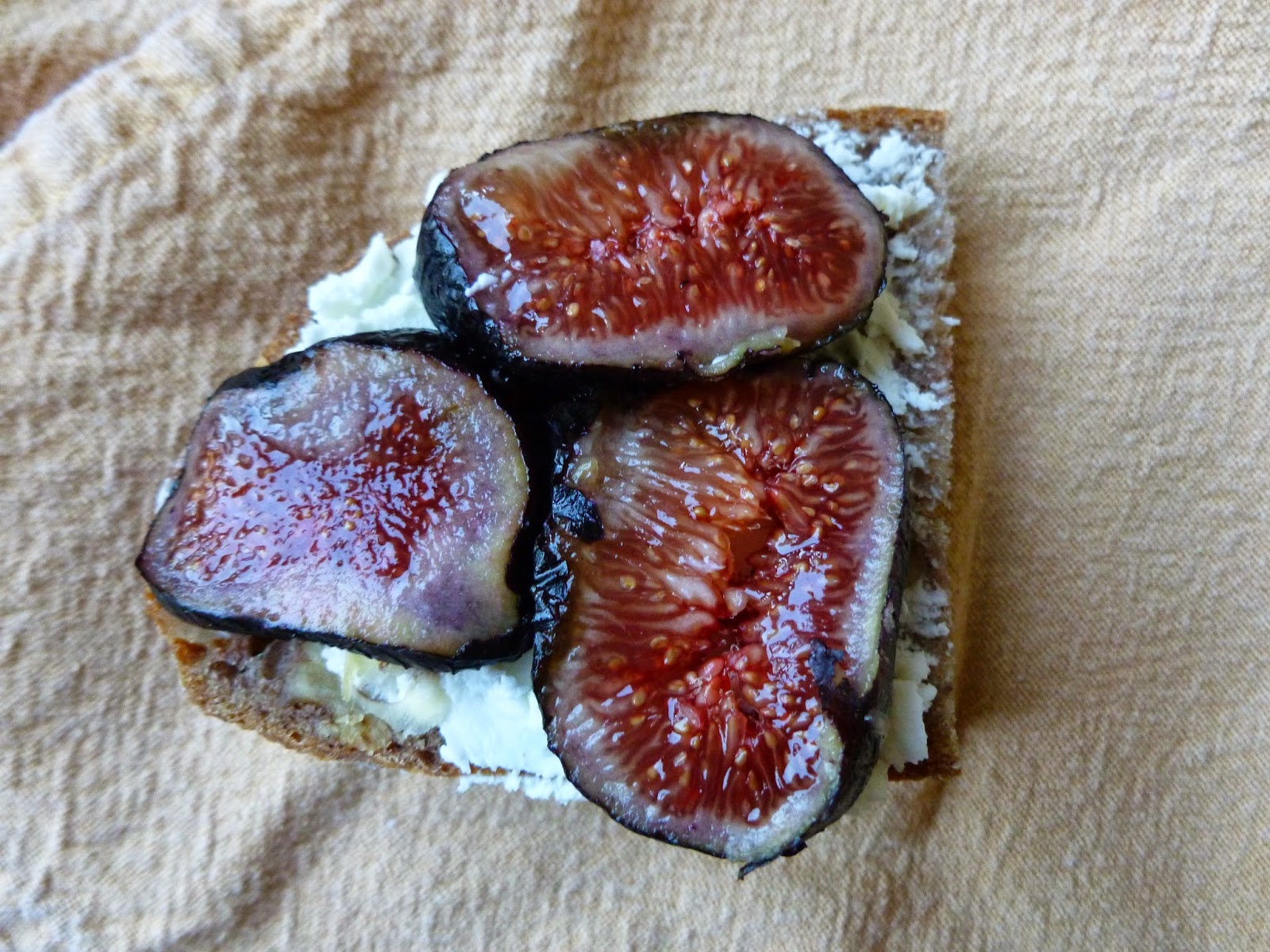 Obviously--from the photos above--this story has a happy ending. A quick pop into Lundari's market provided me the much-coveted goat cheese, and I even splurged to get the thick, dark whole wheat and walnut bread that I knew would be the perfect base. I was right.

My lunch was everything I'd been craving: simple, sweet, hearty, and creamy all at once. A little burst of summer on my tongue.

And you know what's even better? I still have six figs. I think I know what I'm having for dinner tonight.
Posted by Sherezada at 2:03 PM No comments: